What would you do if you were Mr Iwata (laughs) 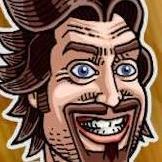